Within Limits and Free of Constraints 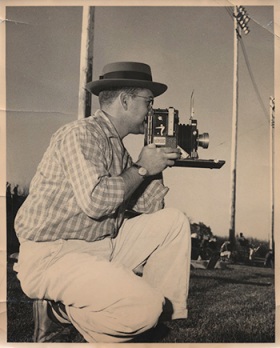 Paul F. Moloney photographs from the sidelines of a football game in 1957, for the Greeley Tribune. My father worked through the apex of one-to-many mass media in the U.S. (Photo by Bob Waters)

There are times when a constraint is fuel for the creative process. As a veteran photojournalist I know deeply how the need to tell an entire story within a small frame, by slicing a millisecond from the unstoppable flow of time can heighten my awareness, accelerate my storytelling skills and open the adrenalin valve. In journalism as a whole, constraints can lead to cleaner and more efficient stories.

But those constraints are largely a product of the mediascape of prior centuries. Classic journalism forms like the inverted pyramid structure, the ten-column-inch story or the 30-second broadcast news segment all came into being because space and time in legacy media was scarce and expensive. And those constraints have been in front of us for so long that they ceased to be just involuntary constraints and have become journalistic standards. Even as the cheap and plentiful Web has broken those restrictions, I have heard many veteran journalists argue that those classic forms are the only real journalism out there.

But what is journalism? I argue that it is simply telling a factual story reported by someone who was rigorous in his or her effort to eliminate assumptions and verify facts, and produced carefully for a concerned public. It isn’t defined by style, structure or medium. We now have virtually unlimited ways to tell a factual story and, in online media at least, an extremely low publishing cost. Stories that justify expansion are far less limited by the economics of the media.

The best journalism will always be efficient in its use of space and time. Daily coverage of boilerplate stories generally do not need expansive transmedia coverage to do their job well. They should stay concise and limited in the time they demand from the engaged public. But when major stories emerge that have complexity, nuance and deep connections to many other stories in our world, then transmedia storytelling is a valuable method.

Transmedia entertainment continues to grow. The transmedia-native SLiDE, an Australian Fox8 teen drama, unfolds on screen and expands through social media designed to give its teen fans a sense of ownership in the story. I was recently impressed by the transmedia worldbuilding efforts of the Ninjago toy series from Lego, in which a backstory of epic style was built for those funny little Lego characters. Academy-Award-nominated Chico & Rita has planted its story in front of new audiences through a comic and music. And dozens of documentary film projects in production declare themselves transmedia projects.

In journalism new tools continue to emerge. Deep Dive from the New York Times adds new degrees of drillablility to their massive archive, and the array of games published by the Times continues to grow. The explosive growth over the past few years of Tribune Media Group’s ChicagoNow and TribLocal confirm that the public is ready for a sense of ownership of their news as well as deeper engagement with it.

This is not simply a big-media game, however. I continue to watch with pride as my former students find new ways to bring their work to the public through both traditional media and its alternatives. They not only fuel their work but reach new audiences through crowd funding. They offer lectures on their stories, line gallery walls with their storytelling images and collect artifacts that connect to their stories. They reach out to the public by any logical means, and they do it alone or in small collectives.

Transmedia journalism does require more advance planning than other kinds of coverage. Decisions need to be made on questions like what the keystone medium will be, how will the story expand (not repeat) through other media, and what subset stories lend themselves to a particular medium. Our constraints of space and possibility are gone.

But what about limits? Fortunately for us we can call our limits self imposed. We can produce journalism within logical limits based only on the value of a story, the attention of our publics and the budget at hand. We can now work within limits even as we are free of old constraints.

The latest major piece of Contexts information is now up, and it looks at ways a transmedia journalism story can be told. Read on for more transmedia thinking. Drill deeper.