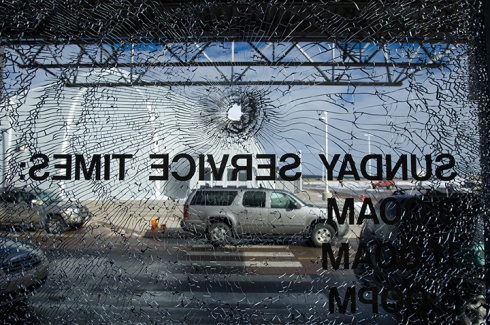 As many as twenty bullet holes riddle the entryway of the New Life church in Colorado Springs, Monday, Dec. 10, 2007, where a day earlier a gunman entered the building. Two are dead in addition to the gunman and another two are injured in the second shooting to hit a Colorado religious organization in a day. The gunman in the Colorado Springs shooting was killed by a church security guard. Two are dead in a possibly related shootings at a dormitory for missionaries in Arvada, Colo., a suburb of Denver. (Kevin Moloney for the New York Times)

Anyone who follows any news in the 21st-century mediascape has experienced this feral and uncoordinated form of transmedia journalism first hand.

Here in Colorado last month we suffered massive and destructive flooding. The story is still unfolding and the aftermath will endure for months more. When the news struck that local mountain streams would surpass 100-year flood levels, I, my friends and colleagues dove headlong into a diverse array of media forms and channels to digest the news. I turned on the local TV broadcasts, I listened actively to local public radio, I watched Twitter hashtags, Facebook posts, Instagram feeds, awaited SMS texts from the university and picked up the phone to talk to friends and relatives.

I didn’t get the story from one place — multiple devices and technologies of all ages were used. I didn’t get it in any one media form — the story came as text, video, audio, conversation and even in the clouds outside my window. I absorbed complete stories from multiple sources and sewed them into a larger and more complex picture of what was happening than I could of had I depended on only one of them.

This applies to other breaking stories, from the Navy Yard shootings to the Boston Marathon bombings to Sandy Hook Elementary. Once engaged with a story that demands fast attention, we immerse ourselves in multiple spaces in the mediascape — online and off — to gather the complete and current picture.

This is not a planned and curated form of transmedia journalism. It is a natural form created by each individual as he or she engages with the story. It illustrates the idea that we can engage with multiple characters across multiple stories in multiple places to achieve what game designer Neil Young calls “additive comprehension.”

We are deeply engaged when rapidly moving events raise cultural, civil or environmental concerns, or has an immediate impact on our lives. A drive to know more, see more and stay up-to-date leads us naturally to transmedial consumption of news. But what about the stories that don’t scream for immediate attention to any and every media form and channel available? Here, as we do for traditional news stories, we depend on style, human connection and compelling narratives to draw a public. We can carry those techniques to predesigned transmedia narratives so that, once engaged, the public has somewhere to find more. Through transmedia implementation we we also open many more access points for the public to find our story.